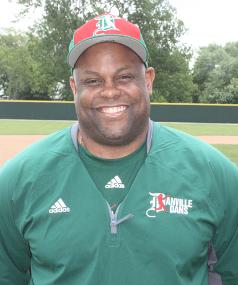 The 2021 season will be the seventh year for Eric Coleman to serve as manager of the Danville Dans. His 2019 won the East Division and finished the season with a 40-21 mark, the second highest win total in team history.

During his tenure in Danville his teams have compiled a record of 205-162 record, for a .559 winning percentage. Four of his teams made the playoffs, including the 2018 squad that won the West Division Regular Season before falling to eventual league champion Terre Haute one game to two in the playoffs.

Under Coleman’s leadership, the 2019 Dans had a record setting season in the Prospect League. The pitching staff set a new league record by striking out 583 batters, breaking the old mark set by the 2017 Dans.

The Dans offense – while not setting any new stolen base records ­­– did find itself topping the record book for runs scored and on-base percentage. There were 483 Dans crossing the plate during 2019, breaking the previous high of 476. They reached base .417 percent of the time, breaking the old mark of .404.

The 2019 Dans also set franchise records for home runs, triples and doubles. The team slammed 66 round trippers, topping the previous high of 40 in 2017. They smashed 116 doubles, besting their 111 in 2017. And they banged out 24 triples, one more than the 23 they hit last season.

Coleman is no stranger to summer collegiate league baseball. He’s been a coach or assistant coach in the New England Collegiate League, Northwoods League, Coastal Plains League, Texas Collegiate League and Perfect Game Collegiate League for 10 different years. He was named Manager of the Year with the Cooperstown Hawkeyes in 2011. He also had time coaching in the Frontier League with the Midwest Sliders/Oakland County Cruisers and Joliet Slammers.

Coleman is glad to be in Danville. “When I was in the other summer leagues, I heard about the reputation and history of the Danville Dans. These past years I learned first-hand that is was all true.”

Gordon Cardenas is coming to Danville to be the 2021 pitching coach. Cardenas played professionally for one year in the Mexican Baseball. He has been a volunteer assistant coach at Purdue Fort Wayne in 2019 and 2021 with former Dans assistant coach Brent McNeil. He is a native of Manhattan Beach, CA, and pitched in college at Auburn and Marshall Universities.

Jeff Wetzel joins the Dans 2021 staff as the hitting coach. Wetzel played baseball for Parkland College in 2015 and 2016, with the ’16 team making it to the DII College World Series. Wetzler received a degree in Sports Management from McKendree University in 2018. Since then he returned to the Cobras to serve as an assistant coach.